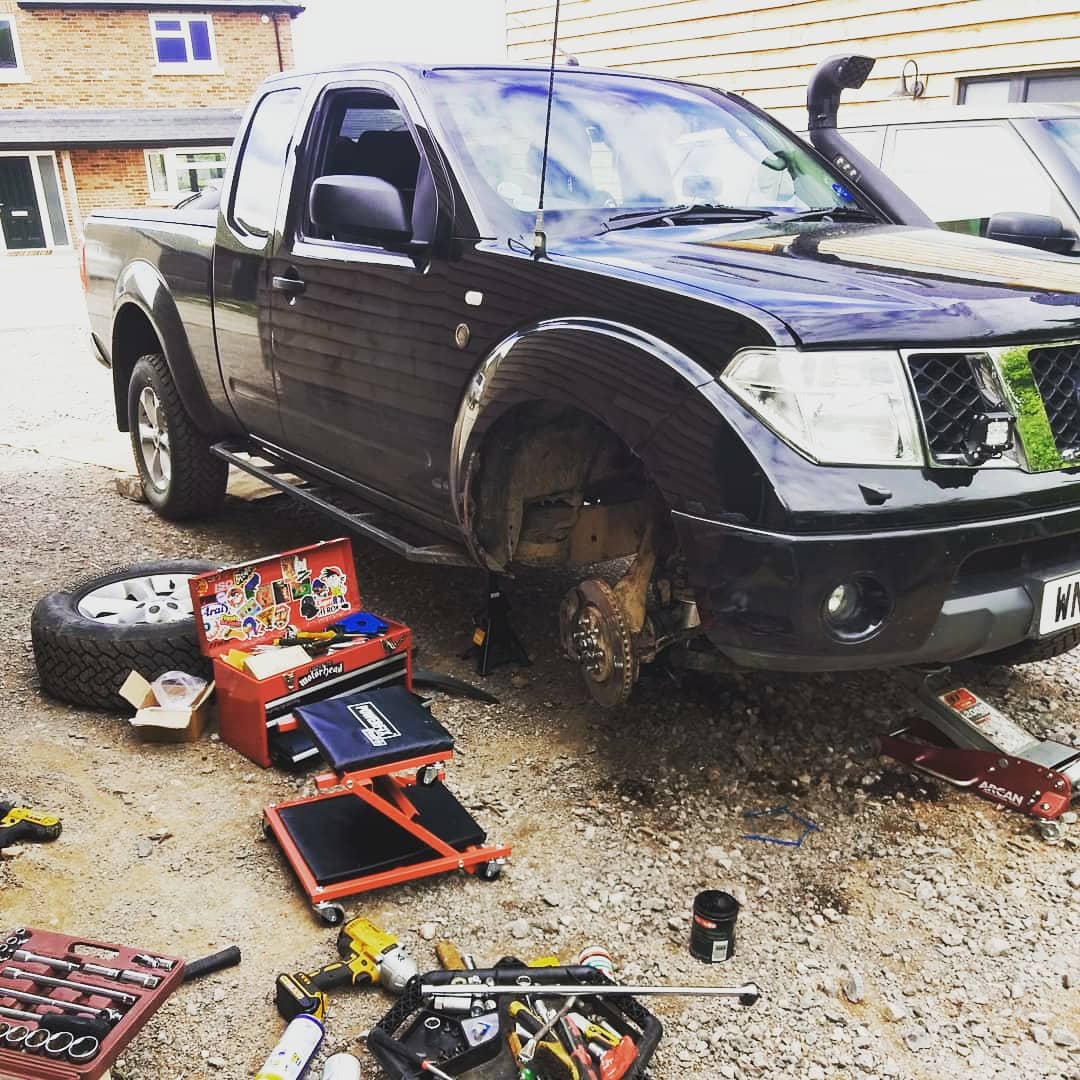 A week after green-laning at Salisbury (a story for another day), we had decided to go down to the New forest camping.

It was a nice relaxing weekend surrounded by the nice peaceful forest. That is until the nightmare began. On the way home the front left wheel began to scream. It was so loud it was scaring the horses that roamed the forest. Moments of quiet sanctuary ruined by what sounds like a stampede of horses being chased by a baby pig….

Anyways once I was home I had a quick look around and nothing seemed obvious… other that the entire front wheel could be shaken and rocked! The bearing was completely gone. How I didn’t notice this while I was driving I’ll never know. So I went straight online and ordered two new front hub assemblies from Energized Customs. They came the next day. Simple.

I went ahead and disassembled the front left wheel and brakes, then onto the hub, bolts out and finally took out the drive shaft. It wouldn’t budge. Time for the hammer. Stupid decision. The drive shaft popped out, and the hub came straight off. The new hub went straight back on, and I started to reassemble. It was only when I tried to put the bolt back on the drive shaft that I had realised my mistake. I had completely ruined the thread with the hammer, and now the bolt. Great.

This complicated things. Instead of buying a complete front left drive shaft (probably the easy option), I bought a new outer CV joint, luckily Milner Off Road had them pretty cheap. It came two days later and after getting completely covered in grease, it was done. No more squeaky bearing.

However, now there was a squeak coming from the right side. Probably a bushing. I sprayed some WD-40 onto all the front right bushings (two on the upper control arm and two on the lower), this seemed to quieten the squeak for a while.

At this point the truck needed an oil change. I bought 10L of fully synthetic 5w-30. I drained the oil from the engine. For future reference it might be beneficial to use a piece of piping to direct the oil away from the skid plate and into a tray.

I forgot to buy an oil filter.

So after letting the truck sit for a day with no oil in it, I picked up a Mann oil filter. Getting the old oil filter off was a pain, I ended up breaking a chain oil filter remover tool, removing the front right wheel and wheel well liner, hammering a screw driver through the filter to try and turn it. That didn’t work. Eventually I ended up borrowing a metal strap filter tool which did the job.

After all that excitement my steering started to squeak! Great. We’ll get to that later.

On to the squeaky bushings. I removed the front right upper control arm as this is where I thought the squeak originated. I took it to a shop to get the old bushings pressed out. After an hour or so of them beating the bushings with a sledge hammer they finally popped free. I had bought some polyurethane bushings from Milner Off Road as a replacement. They pushed in easily and went back on to the truck with ease. Wheel back on and truck on the ground, there is still a squeak…

This is where I am now, 3 months from the first squeak. I’m pretty sure it must be the lower bushings squeaking now and possibly the lower ball joint causing the noise with steering. I decided the best action was to buy a lower control arm complete with new bushings and ball joint installed. This does mean that I won’t be able to put in polyurethane bushings but with all the rough terrain of green-laning I think it won’t be too many years before they need changing.

With the new control arm installed I should have a quiet truck! But for now I’m stuck with this squeaky thing.